Where is The Initiative?

These were the things I was thinking when we started taking objectives in Tenal.  After the first few objectives we all came to realize that Razor and INIT had both already moved a majority of their assets out of Tenal.  After speaking to a few former Razor folks (yes I did find Razor) they had started moving things out almost a month prior to our hitting Tenal about when World War Bee (WWB from here on out) kicked off.  The link covers more of the overall WWB stuff than I will here so check it out if you would like to know more about it. 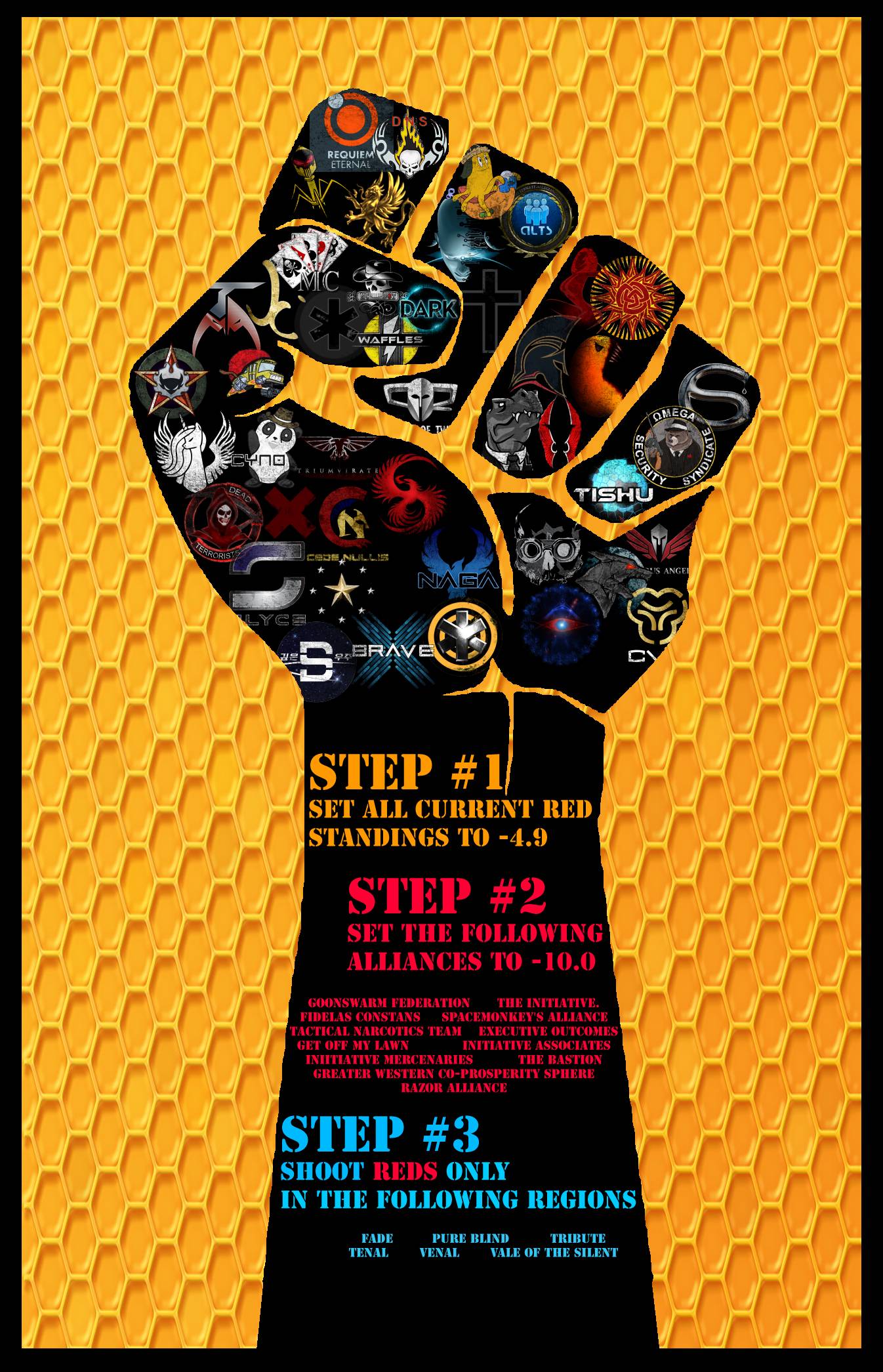 Funny thing to note that PL/NC. would not blue us and would actually shoot at our fleets as we moved around to do either roams, or whatever else.  They would not shoot us for the major WWB operations, but even then I was skeptical.

As I wrote before the EUtz would get the brunt of the bigger fights in WWB for Drone Walkers these were normally lead by Bruce Ernaga leader of inPanic or Jay Wright, We had a couple fights of note, but they were not DW pure objectives for the most part that I can remember.  I dug through my killboard and found the biggest fight I was in with DW and either Eve Kill is busted or it has a lot of stuff in it as it has been taking forever to load!  We made a huge error by bringing both Cerbs and hurricanes which led to us losing as much as the CFC.  With nearly a 1000 folks in local and brawled it out over what I cannot eve remember, but the fight was brutal for us.  Bruce lead us on this one and we the shield to be beat on while we did what we could to keep it close.  That was the more memorable battle that I recall, and there were chances we thought for bigger fights to see if the CFC would bite, and we brought our dreads out to play for these X-Large Ship Maintenance Array & X-Large Ship Maintenance Array  if you do battle reports you'll notice the CFC did not show, and to be honest I would not have either.  With a 1000 of the MBC, and a small cap fleet from the new comers to the WWB front there was no way the CFC would come and suffer their own personal B-R for what we may have destroyed in those XLSMA's.


With all that going on Drone Walkers kept pushing and flipping systems in Tenal with minimal resistance at all past some that had clones they would hop in to whelp ships.  While flipping systems we killed towers a plenty and things were running pretty quick for us to flip the entire area in a little over 3 weeks.   At about the halfway point people started talking about what next, and what would we do with the space.  Well the space part was simple enough we would give it away to anyone willing and able to take it and live in it that was not Goons.  At least that was the initial notions.....

For those looking XDeath had been making moves with fleets and Sov in and around Oasa.  Then once we declared Tenal fully conquered XDeath made their move.  It was capped off with a mail from Attakare a diplo from XDeath and controls the standings sheet..but before that since they had not kicked all the groups from the gc.mail list a mailing list XDeath uses to send mails to all renters/supporters.

Also warning this is google translated so my apologies!

Over the past few years we have carried out the practice of Space in dronregah young alliances or corporations wishing to establish an alliance. The only condition was - PVP. As practice has shown once again, people do not know how to appreciate the good. Greed, vanity, these vices turned the head of management of a number of alliances.

Of all who received dronregah Space are two of the alliance. This Alternate Allegiance and inPanic. Quite recently they organized a coalition Drone Walkers. This in itself is not that important, if not the number of their actions.

CEO inPanic Bruce Ernaga: "xdeath has no control over us anymore Inpanic, alts and kick dont have to listen to them anymore We are free..". Inpaniki are the second generation of traitors in Cobalt (damn region, if you know what I mean). Alliance Spears of Destiny, which was their predecessor received in Space cobalt in exchange for a promise to close the entrance to the dronregi from Vienna. Leaders of the alliance for a few months engaged in poaching sitizenov, a peace agreement with the attacking alliances region instead of countering them. As a result of the revolution which we have contributed to the reformed alliance inPanic. Apparently the leadership of the new alliance could not get rid of the virus of separatism. By its actions, it has brought the alliance to reset our part.

CEO Alternate Allegiance P Air: "im tired of being nice guy, thinking of changing tactics". Alliance started its journey from sitizenov NC .. Our cooperation enabled them to expand to an impressive value 3,300 pilots. During formation, as it turned out in the course of a large-scale investigation, the alliance did not disdain the direct theft of R64 moons pribiraniya their hands delicious systems podbivaniyu separatism other residents dronregov (eg recommendations tightening transmission Spacey), poaching sitizenov in stunning scale (about 500 pilots excluding other Citizen Alliance). Apparently it's his understanding "to be a good guy."

The guys from time to time were silent. Yes, they were helping in local conflicts that have been a part of their agreement. Now they just have declared independence and continue their destructive activities. Yes, during the war in Insmazere small contingents participated in dronregah alliances. Yes, they have played an important role in the final battle for the hub C-J6MT. However, what they have done and are doing now does not fit with the agreements that have been concluded with them.

A few days ago, the leaders of many alliances Drone Walkers coalition stated that they are in danger of losing their PVP-pilots and forced to begin active operations against the CFC to deter players. Such unanimity immediately aroused suspicions because the war in Insmazere some alliances are not even lit up. A few days later it became known that the alliances Drone Walkers stupid loot received for the contract against the CFC. Provided that they are, through the efforts of our diplomats, are included in the agreement not to invade between us and the CFC is - a direct blow to the agreements of all kinds. Do not be afraid of these words - a betrayal for money and nothing blatant lie.

We tear them all the agreements and begin to attack their systems. If someone and tired of being a nice guy, so it's me

Following message is a notice of standings reset between GemiCo and all the alliances that are part of Drone Walkers from 10.04.2016 1800 ET.
Maleficent activity of several alliance leaders of Drone Walkers prevents any further partnership between us. Contact GemiCo coalition diplo for details.

My guess was it was XDeath were waiting for was for us to fully be stuck in, and in a worse place to redeploy and defend ourselves.  As to some of the things said in the mail I cannot comment on anything, but ALTS things.  ALTS did a lot of the entosis work in Insmother and from what I gathered a huge amount of it.  So the minor praise there is ignorance to the fact of the work they put in, and to the other items listed about poaching was funny enough.  They said we took effectively thousands of pilots! Yea right........ you mean picked up groups or pilots that could barely hold on and brought them in sure.   Though looking at it from their point they wanted ammo to fire up their war machine.  As to the R64 I am not sure on, but after speaking to leadership I am sure we did not steal and when asked it was a matter of we had it and a new group moved in then suddenly wanted it and said no.  If that is stealing what we already had then ya we are thieves.  The funny thing is the other blocks owned more of the higher end moons in drones than we ever did under alt corps.

4 days later would come to cease fire which was just a cover so XDeath to make a better position for them selves and buy more time.

As of this moment, a CEASE-FIRE Order Has been given by Drone Walker Command.

More information will be coming

Awaiting Positive Confirmation of the Above

What is going on? Requiem Eternal is still being aggressed by Legion of Death and Shadow of Death.